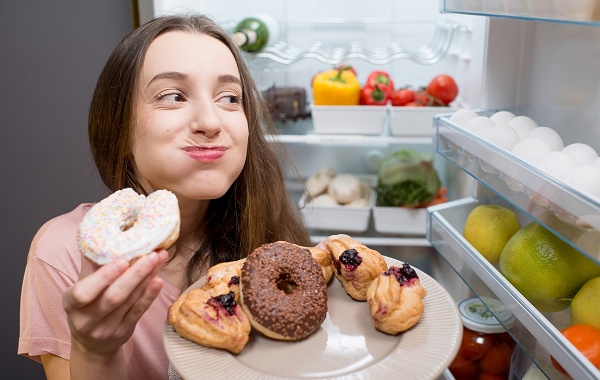 When it comes to one’s wellbeing, sugar has a reputation that is both positive and negative. Sugar can be found in its natural form in all foods that are classified as carbohydrate sources, including fresh fruits and vegetables, cereals, and dairy products. It is not frowned upon to consume natural sugars found in entire foods. Plant foods also have a lot of fiber, important minerals, and antioxidants. Dairy products, on the other hand, have protein and calcium.
Because these foods are digested slowly by your body, the sugar that is contained within them provides your cells with a constant supply of energy. It has been demonstrated that increasing one’s consumption of fruits, vegetables, and whole grains can lower one’s chance of developing chronic diseases like diabetes, cardiovascular disease, and some malignancies.
However, issues arise when you consume an excessive amount of added sugar, which refers to sugar that food producers add to items in order to boost flavor or lengthen the products’ shelf lives.
This article will tell you about some of the bad things that can happen when you eat too much sugar.

PROTECT YOURSELF FROM CHRONIC INFLAMMATION.

The scientific community has shown that chronic, low-grade inflammation can develop into a “silent killer” that plays a role in the development of a variety of diseases and disorders, including cardiovascular disease, cancer, type 2 diabetes, and others. The majority of processed foods, as well as soft drinks, fruit drinks, flavored yogurts, cereals, cookies, cakes, and sweets, are among the most prevalent sources of fructose in the average American diet. But there is also added sugar in things like soups, bread, cured meats, and ketchup, even though you might not think of these things as being sweetened.

IMPACT ON YOUR HEART

How sugar actually affects heart health is not completely understood, but it appears to have several indirect connections. For instance, high amounts of sugar overload the liver. Your liver metabolizes sugar the same way as alcohol and converts dietary carbohydrates to fat Overtime, this can lead to a greater accumulation of fat, which may turn into fatty liver disease, a contributor to diabetes, which raises your risk for heart disease.
Consuming an excessive amount of added sugar can lead to an increase in both blood pressure and chronic inflammation, which are both pathological pathways that can lead to heart disease. Excessive consumption of sugar, particularly in sugary beverages, also contributes to weight gain by tricking your body into turning off its system that controls appetite. This happens because liquid calories are not as satisfying as the calories that come from solid foods, and sugary beverages contain particularly high levels of sugar. When people consume sugary beverages in addition to their regular diet, it is much simpler for them to add additional calories to their diet overall.

MAJOR CAUSE OF TOOTH DECAY

Sugar is the sole source of nutrition for the oral bacteria that have already colonized a person’s mouth. During the process of digesting sugar, bacteria create acid as a byproduct of their metabolism. This acid has the ability to disintegrate tooth enamel, which can then lead to cavities or holes being formed in the teeth. People who eat a lot of sugary foods, especially between meals as snacks or in the form of sweetened drinks, are more likely to get cavities in their teeth than people who don’t eat a lot of sugary foods.

When someone has diabetes, consuming an excessive amount of sugar might cause damage to their kidneys. The kidneys are an essential component of the body’s circulatory system, serving to filter blood. When there is an excessive amount of sugar in the blood, the kidneys will begin to excrete it through the urine. This process begins when the blood sugar reaches a certain level. If it is not well managed, diabetes can cause damage to the kidneys, which stops them from performing their normal function of filtering waste from the blood. This can ultimately result in the failure of the kidneys.

The presence of advanced glycation end products (AGEs) in the body is linked to the development of diabetes and can be caused by consuming an excessive amount of sugar in the diet. However, they are also responsible for the disruption of collagen production in the skin.
As stated in the Skin Therapy Letter, there is some evidence to show that a high number of advanced glycation end products (AGEs) may lead to accelerated apparent aging. However, in order for researchers to fully comprehend the role that sugar plays in the aging process, they need to conduct additional research on human subjects.

CONCLUSION Some foods have a lot of extra sugar added to them. Cutting back on or getting rid of these foods is a good way to cut down on the amount of sugar a person eats. This will help you avoid all of the problems that were talked about in this article. People should see a doctor, though, if they have any of the signs of high blood sugar.