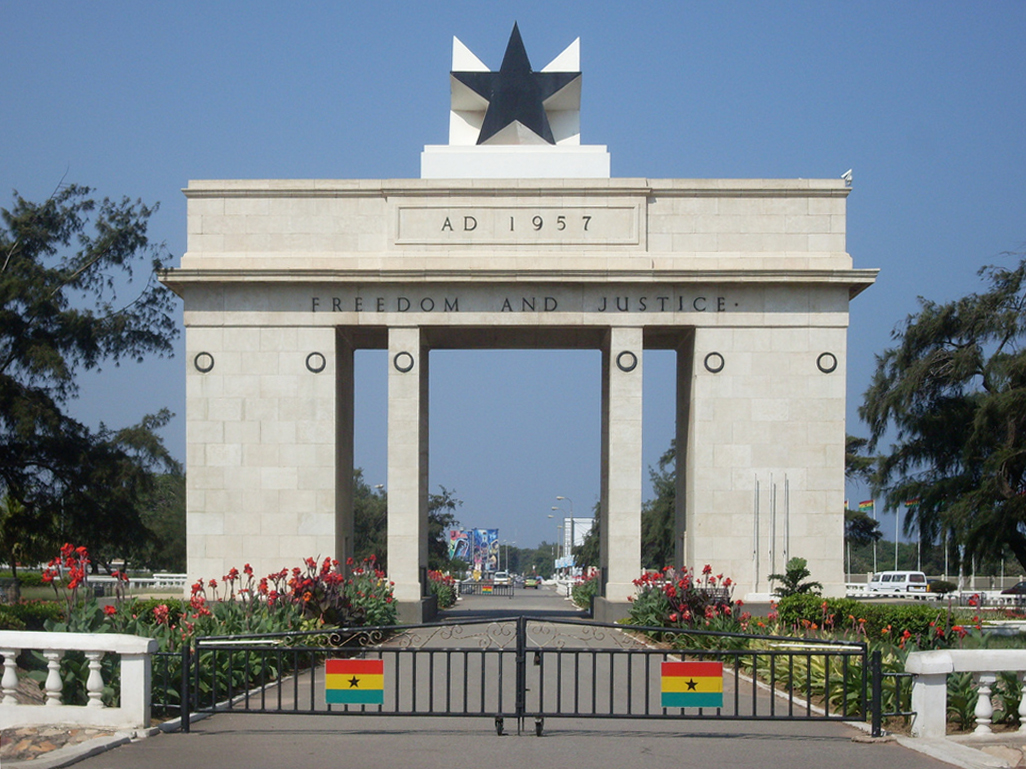 The history of Ghana is quite a complex but very interesting one. Did you know that Ghana was formerly known as the Gold Coast due to its gold-rich land? Or that the flag of Ghana is deeply connected to the country’s fight for independence and to Pan-African ideas?

Ghana, officially the Republic of Ghana, is one of the sixteen countries in West Africa. It has a common boundary with the Gulf of Guinea and the Atlantic Ocean to the south, sharing borders with Ivory Coast in the west, Burkina Faso in the north, and Togo in the east. Ghana’s total geographical size is 238,535 km2 (92,099 sq mi) and it is made up of a variety of biomes, from tropical rainforests to coastal savannas. Ghana has about 31 million people, making it the second-most populated nation in West Africa after Nigeria, according to the census conducted in the year 2021. Accra is the capital and largest city of the country. Kumasi, Tamale, Sunyani, Cape Coast, and Sekondi-Takoradi are also important cities.

Ghana began as an empire in 300AD with a group of united people from different tribes with only one king known as Dinga Cisse, who was a brave warrior. The word ‘Ghana’ means’ warrior king’, which refers to the king. Due to the fact that the land was enriched in gold, the majority of the inhabitants of what is now Ghana were wearing gold jewelry when Portuguese traders arrived there in 1471. This began a new era of gold, ivory, and timber trade between Ghana, the Portuguese, Dutch, British, and several nearby Akan states, which helped Ghana to become wealthy and powerful.

After 29 years of trading, the focus shifted to the slave trade, and slavery overtook gold as the main export. In the year 1600, the Dutch, the British, the Danish, and the Swedish arrived to officially settle in Ghana and build a couple of castles, of which some are Cape Coast Castle and Elmina Castle. The slave trade became highly organized, and millions of Africans were taken captive and forcedly moved across the seas. The act of slavery continued to be legal until 1874, when the nation was declared a British crown colony.

In 1957, Ghana became the first sub-Saharan colony to gain independence under the leadership of independence fighter President Kwame Nkrumah, and here is where we cannot talk about Ghana without mentioning Kwame Nkrumah. After independence, the country was named Ghana. The flag of Ghana consists of three colors, being red, yellow, and green, with a black star in the middle of the yellow, which represents political unity between all those who live in Africa. The currency of Ghana is the cedi.

Following independence, corruption, military coups, and authoritarian governance plagued Ghana’s rulers. Ghana was practically a one-party state for many years until 1981, when Jerry Rawlings, the country’s new leader, swore to abolish this once and for all. A new constitution that permitted the formation of several political parties and a democratic form of government was enacted in 1992 under the leadership of Jerry John Rawlings.

Talking about Ghana without mentioning Kwame Nkrumah (Osagyefo) is like talking about demand in economics without mentioning the price of the commodity. He led the country’s drive for independence from the British and ruled over the birth of Ghana as a new country. He was president of the country from the time it became independent until 1966, when he was removed by a coup.

Kwame Nkrumah, popularly called Osagyefo Dr. Kwame Nkrumah was born on September 21st, 1909 in a village called Nkroful. He started his early education at the Roman Catholic elementary school in Half Assini. He furthered his studies at Achimota College in 1930 and, after graduation; he started his career as a teacher in a Roman Catholic Basic School in Elmina and Axim.

When Nkrumah developed a high interest in politics, he decided to embark on further studies in the United States to gain both local and international experience in politics. He enrolled at Lincoln University in Pennsylvania in 1935 and, after graduating in 1939, obtained master’s degrees from both Lincoln and the University of Pennsylvania. He became deeply involved in politics, reforming and eventually rising to the position of President of the United States and Canada African Students Organization. He went to England in May 1945 and organized the 5th Pan-African Congress in Manchester.

Nkrumah was invited by the United Gold Coast Convention (UGCC), a political party in Ghana, to serve as the party’s general secretary in 1947. Because of his immense contribution to the party as the general secretary, the majority of the people developed hope, trust, and interest in his administration. There was an extensive riot among the leaders of the UGCC in February 1948, which led Nkrumah to form a new political party known as the Convention Peoples’ Party (CPP) in June 1949. In 1950, Nkrumah embarked on a campaign involving nonviolent protest and strikes with the British colonial authorities, and through that he was arrested and sentenced to one year imprisonment.

While Nkrumah was imprisoned, the CPP won the first general election, and Nkrumah was released to become the leader of government business and, in 1952, the Prime Minister of the Gold Coast. After taking office as Prime Minister, Nkrumah led the country to complete independence in March 1957.

After independence, Nkrumah’s style of government made his popularity in the country rise through the construction of schools, hospitals, roads, and the creation of better career opportunities for the people of Ghana. Ghana became a republic in 1960 after a vote, and Kwame Nkrumah was elected president with a lot of power in both the legislature and the executive branch.

On February 24, 1966, the army and police in Ghana seized power while Nkrumah was visiting Beijing and he was overthrown. Nkrumah found asylum in Guinea and spent the rest of his life there. In 1972, he developed cancer and died in Bucharest.